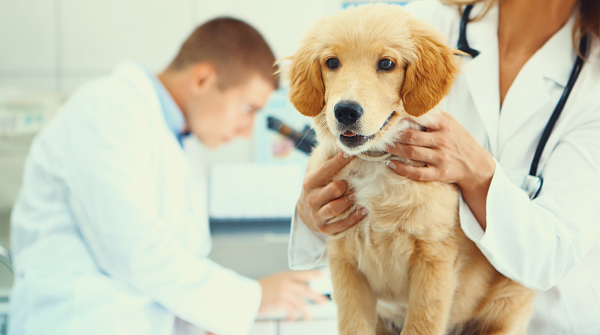 What is juvenile cellulitis?

Juvenile cellulitis, also known by the name 'puppy strangles’ or sterile granulomatous dermatitis and lymphadenitis is an uncommon skin condition of young dogs. Juvenile cellulitis commonly affects young puppies, up to six months of age. In rare cases, the condition may affect young adult dogs and has been reported in dogs up to four years old.

The underlying cause of juvenile cellulitis has not yet been identified. This condition is currently regarded as idiopathic, meaning that its cause is unknown. The condition does appear to have an immune-mediated component, meaning that the puppy's immune system is attacking its own skin.

Juvenile cellulitis may have a hereditary component. Certain families of dogs are more likely to develop juvenile cellulitis, and it occurs more in Golden Retrievers, Dachshunds, and Gordon Setters.

What are the clinical signs of juvenile cellulitis?

The first sign of juvenile cellulitis is usually an acute (sudden) swelling of the face and muzzle. This generalized swelling is followed by the development of raised bumps and pustules over the face, muzzle, and ears. Over time, these pustules may rupture and crust over, resulting in heavy scabbing across the affected areas. If severe lesions develop, especially around the eyes, permanent scarring may develop. This scarring is cosmetic in nature and does not affect the dog’s quality of life.

Although the skin lesions associated with juvenile cellulitis are often first noticed on the face, they may spread across the body if the condition is not treated promptly. The paws, anus, and vulva could be affected.

"Although the skin lesions associated with juvenile cellulitis are often first noticed on the face, they may spread across the body if the condition is not treated promptly."

You may also notice swelling under your dog’s jaw. In dogs with juvenile cellulitis, the submandibular lymph nodes (located on either side of the neck, under the jaw) often become swollen and tender. As the disease progresses, these lymph nodes may rupture and drain, leaving oozing tracts and openings in your dog's skin.

How will my veterinarian diagnose juvenile cellulitis?

"Skin scrapings will likely be performed to rule out mange and fungal cultures may be used to rule out ringworm, as mange and ringworm can both appear similar to juvenile cellulitis."

After these conditions are ruled out, your veterinarian will perform further testing to look for less common causes of skin inflammation. Skin cytology may be performed to examine the cells on the surface of your dog’s skin. This test involves taking a sample from the surface of the skin (using a slide that is pressed onto the skin or a piece of acetate tape that is used to collect surface cells/debris) for examination under a microscope. Additionally, your veterinarian may recommend a skin biopsy, in which a full-thickness skin sample is collected and submitted to a laboratory. Skin impressions and biopsies may reveal a specific type of inflammation that can be used to identify juvenile cellulitis.

How is juvenile cellulitis treated?

Juvenile cellulitis is an immune-mediated disease. Therefore, treatment of juvenile cellulitis relies upon suppressing the immune system to stop the auto-immune reaction. Prednisone (steroid) is the drug used most often and is typically administered over a period of several weeks before being gradually tapered. Side effects of prednisone include increased thirst and urination, as well as an increased appetite. Other immunosuppressive drugs may be used in place of prednisone.

What is the prognosis for juvenile cellulitis?

Most cases of juvenile cellulitis fully resolve with prompt treatment. Typically, one course of steroids is adequate to resolve the condition. If the condition recurs as steroids are tapered, long-term therapy may be required, but this is rare.

© Copyright 2022 LifeLearn Inc. Used and/or modified with permission under license.